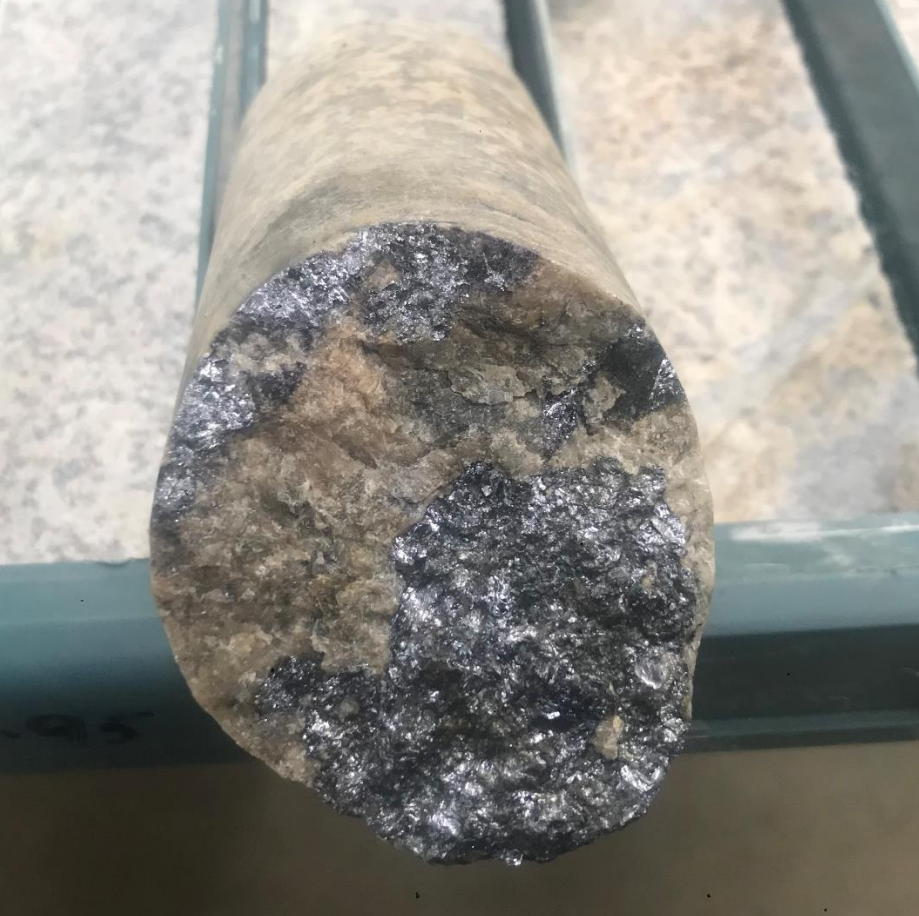 Molybdenite vein in hole SAYD2, drilled at the Sayers prospect.

The reports cover the following projects:

Data includes the Final Reports as well as all available geological, assay and hyperspectral data.  Drill core is available for viewing, by appointment, at the Mornington Core Library.

The Brassey South project sought to test a VTEM anomaly, hosted within the Heazlewood Ultramafic Complex, close to the Lord Brassey nickel mine. Despite testing the modelled target location, no alteration, mineralisation or obvious conductive source for the VTEM anomaly was intersected.

The Denison River goldfield project, west of Scottsdale, occurs in an area of numerous historic shallow quartz reef workings, hosted by Mathinna Supergroup sediments, where no deep drilling had been undertaken. The EDGI hole was designed to test if any gold mineralisation was associated with deep structures or a deep hornfelsed contact with the Lisle Granodiorite. Numerous zones of quartz veining and breccia were intersected, as well as strongly hornfelsed sediments towards the end of the hole, but no significant gold mineralisation.

The Bell Mount and Round Mountain EDGI projects, near Moina, were designed to test 3D IP conductivity and chargeability anomalies located within Cambro-Ordovician sediments, in structurally favourable settings. No significant mineralisation was intersected by the drill holes and the geophysical anomalies have been attributed to black shale.

The Sayers EDGI project is also located at Moina, just within the northern margin of the Dolcoath Granite. Drilling was targeted at 3D IP chargeability and conductivity anomalies, coincident with multi-element soil geochemistry. Greisen lodes were intersected in the target locations, locally containing wolframite, molybdenite, bismuth minerals, chalcopyrite, pyrite, beryl, as well as anomalous gold. The results of the drilling have provided encouragement for the company to continue exploration in this area.